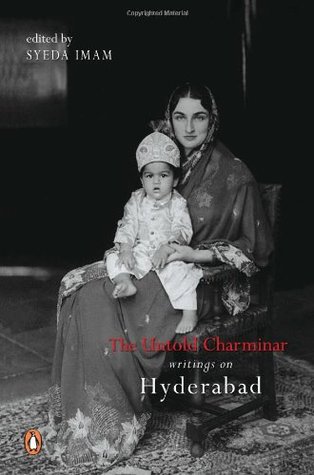 A jewel of a book!

Such an eclectic collection of mostly personal accounts, memoirs, and commentaries on the city that I call home.

From Narendra Luther‘s “Hyderabad through Foreign Eyes” which sets the stage nicely for what’s to follow, to Bilkees Latif‘s “Rare Visage Of the Moon” that talks about the lesser known Mahlaqa Bai – an Urdu poetess and courtesan, and then you have Sarojini Naidu‘s “Letters too tell stories” which painstakingly unfurls the loss she felt after the death of the 6th Nizam.

Each chapter charts the evolution of Hyderabad, from the opulence of the Nizams to their eventual downfall, the accession to the Indian Union in 1948, and what became of the city thus, how it transformed into the bustling concrete jungle of today yet never losing the spirit and harmony that has become its trademark. The spirit of Hyderabad and its people being the unifying thread that runs through every essay.

There are other interesting essays that detail the inclusiveness of the Nizams and by extension the city. Yezdayr Kasooji‘s “Growing up a Parsi in Hyderabad” is a wonderful account of the Parsi community and culture and how they had adapted to the local traditions, in true Hyderabad fashion. There’s just so much here for anybody who’s associated with Hyderabad that it makes for an overwhelming read. There’s even an aside on how the peculiar Dakhani language came to be.

Reading this book has given me a newfound appreciation for the city of Hyderabad. And I was saddened that there’s such a rich history to this place that most might never know. This is definitely a book worth picking up!

I usually write about these

Check out my other blog: All The Right Questions

Why are all digital assistants female?

Her Choice: What exactly is women empowerment?

What ‘exactly’ is introversion?

Do you still take print receipts of your ATM transactions?

What happens when you press the elevator button twice?